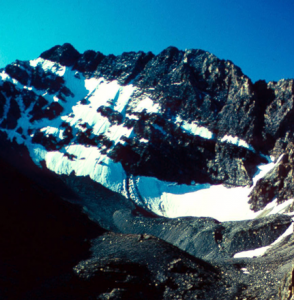 The central east to west mountain range that virtually cuts Solista in half. It is known by several names, depending on where you are. The Barrier, The Gray Mountains, ‘Dhun-Da-Thar’ (if you are a Dwarf) THE Mountains, The Fence, or ‘ShanTahVa’ (to the Elves.)
There are a few reliable passes through the mountains, especially to the east and west ends, but much of the center is virtually impassable to all but skilled climbers and woodsmen. Its southern slopes are conifer forest until the altitude is too great and cold. Most of the interior passes and valleys are permanently choked with snow, ice and growing glaciers.
Deep beneath the mountains lies one of the great Dwarven Realms of Titan. No outsider knows its full extent or all of its entrances and cities. There are ‘public’ places where the Dwarves conduct business with the outside world, but few non Dwarves are permitted to penetrate very deep into the depths of the Realm of Dhun-Thar.
The mountain range forms something of a fish hook on its western end, turning north and then east. In the cusp of this hook is a large fresh water lake linked to several smaller ones. This valley, though cold, is mostly snow free and is home to both conifer and deciduous trees. It is also home to the largest population of Elves in Solista. The Kingdom of ShanTah.