Sages have identified evidence of a settled Elven presence on Titan dating back at least 80,000 years, long before the current climate cycle began. Elven civilization spanned much of Titan in this distant past, and probably existed at least another 50,000 years before the oldest ruins yet studied. At one time the Elves must have numbered in the tens of millions, but they have been in a long, steady decline. Today it is likely that the Titan wide population of Elves probably numbers considerably less then a million. Known populations of Elves, they are very secretive, account for perhaps 200,000 total.
Elves average between 4.5′ and 5.5′ feet, weighing in between 110 to 160 pounds. Their overall build is slight but muscular, their features are, to most humans, very attractive. For the most part the only hair on an elf is on their heads, facial hair is unknown. Skin color ranges from pale tan to dark brown, and hair colors range from nearly white to deep black. Eye color is green or gray. 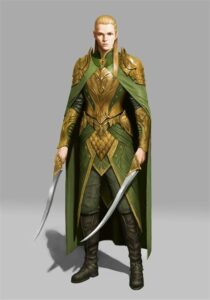 There are two known ‘sub groups’ of Elves. They are commonly referred to, by humans, as ‘Wood Elves’ and ‘Gray Elves.’ The principle difference between them seems to be cultural, with Wood Elves dwelling in forests and other natural settings, making their homes in natural caves or in high tree forts. While the Gray Elves tend to build cities, fortresses, towers and structures of stone, favoring high mountains and coastlines. Also Gray Elves tend to be slightly taller then their cousins. 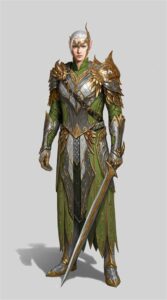 Aside from this there is little to distinguish the two to a human eye. They speak the same language, though there is a slight accent difference to a highly trained ear, wear similar clothes, share common religions, traditions and history.

It is widely held by most Sages that it was the Elves that taught early humans the arts of civilization (Something vehemently disputed by the Churches and followers of Kostris!) And there is little doubt that ALL of the basis of Arcane Magic is the product of ancient Elven sorcerers. The ‘Language’ of Magic is an archaic form of Elvish, one that Elves today no longer routinely speak.

Despite thousands of years of interaction between humans and elves, successful interbreeding is actually pretty rare. Most of the time relations between the two species produces no progeny. On those rare occasions when it does (less then 10%) the child is almost always 99% sterile themselves. Beyond that the Half Elf is usually healthy and benefits from the best traits of both species.

Half Elves tend to be taller and more muscular of build then a full Elf.  Dark hair is more common and males are able to grow beards as a human male would. (Full Elves do not have facial hair.) 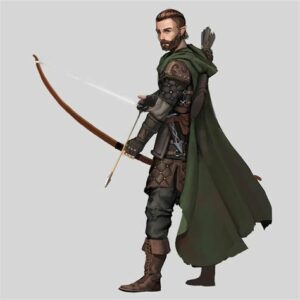