There are three sentient species derived from some common reptilian ancestor. They are clearly related though not allied or directly connected.
All three are egg laying, scaled and with claws, crests, horns and colorations that reveal connections between their groups.

The smallest, weakest and most numerous of the reptile races are the Kobolds. Bipedal, averaging 3′ to 4′ in height and weighing 50 to 90 pounds with scaly hides, sporting horns on their heads and sharp claws and stubby tails. Though they are bipedal their short stature and legs mean they do not move quickly. The Kobold is found in temperate to tropical areas. Primarily nocturnal in nature they favor under ground lairs.
Though there are exceptional individuals, most Kobolds are not very bright or brave unless they have superior numbers or, are defending their hatchery. They make very little beyond stone tools but will happily use what ever they steal or find.
Kobolds have their own language, though there is no written version.  It is a corrupted form of HzzzSarth, and Kobolds can communicate with Lizardmen.  Almost all Kobolds also speak Goblin and if they are literate (unusual) it will be in Goblin.  Kobolds are often slave/servants of the HzzzArth. 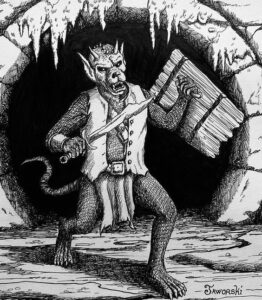 Larger, smarter and more aggressive are the Lizardmen, or ‘HzzzSarth’ in their own language. Ranging from 5′ to 7′ feet and height and 140 to 200 pounds in weight. They are scaled with horns, thick, sharp claws and long, flexible tails. Their legs are longer, proportionally, then the Kobolds, allowing them to easily walk upright and run swiftly, like a human. They are diurnal and usually nomadic, though permanent settlements do occur. They are respectable craftsmen, making weapons and shields of leather, wood and metal. They keep domesticated animals and have a written language of their own.  Most Lizardmen also speak either Goblin or the local Human ‘Common’  though pronunciation issues caused by a lack of lips can make comprehension difficult. 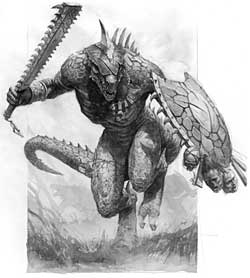 An aquatic reptile species, known to humans as ‘Sea Devils’ or by their own name ‘Shharguhhhnn’ can be found in the warm, shallow, waters of the Narrow Sea and South Sea. Scaled like the Lizardmen, with horns and claws, the Sea Devil have shorter, thicker legs and a long, wide muscular tail to propel them through the water. Sharp claws and teeth are their primary weapon, though they are known to employ nets, spears and weapons of razor sharp coral and shells.
Sea Devils can survive out of water but are slow and clumsy due to their leg and tail configuration, though in the water (which they can breath) they are swift and dexterous.
Shharguhhhnn have their own language that is unrelated to any other.  The educated Shharguhhhnn usually speak one of the Human Common languages.  However, since contact with humans is generally through sailors that could be from anywhere, and Sea Devils are often nomadic, the human language spoken may not correspond to the immediate locales languages.  Some Shharguhhhnn can speak a bastardized version of Lizardman. 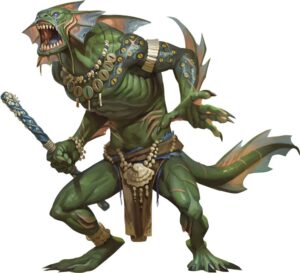