(DM Note: Crossbows are an under rated weapon in AD&D. Historically the Catholic Church prohibited their use against Christians due to the horrific wounds they inflicted. This aims to correct some of the issues.)

It is generally accepted by Sages that Crossbows are a Dwarven invention. Designed to facilitate shooting in low roofed tunnels (Crossbows do not require as much ‘arch’ in their shots.) And to enable Dwarven miners and workers to keep a ‘loaded’ missile weapon at hand.

Light Crossbows are cocked by putting the ring or ‘stirrup’ at the the front of the stock (called the ‘Tiller’) on the ground, putting ones foot in the stirrup to hold the weapon steady, and drawing the bow string back using one or two hands. Cavalry crossbows are designed to be cocked with one hand and there is generally a hook built into the side of the saddle to catch the stirrup of the crossbow and pull against.  The Light Crossbow is a very simple weapon and can be used by any class that does not have a restriction on missile weapons or drawing blood (clerics.)  It DOES NOT require a weapon proficiency to use!  It only requires instruction from anyone already able to use one and about an hours practice.  Shooting without that practice will cause penalties to hit until the character spends an hour practicing. (See Weapon Proficiencies for details.) 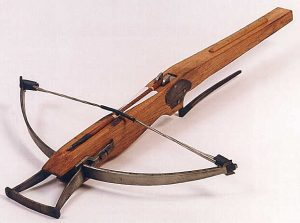 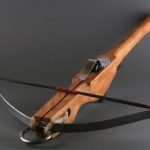 Medium Crossbows are cocked using a device called a ‘Goatsfoot’ that increases the shooters strength to cock the bow by means of leverage as generated by the Goatsfoot. This allows a much stronger bow and more powerful shot then could be generated by simple muscle force. It is a slightly longer process to cock and reload. (But in AD&D terms it does not change the RoF.) A Goatsfoot is included in the price of the Medium Crossbow. A replacement Goatsfoot costs 3gp 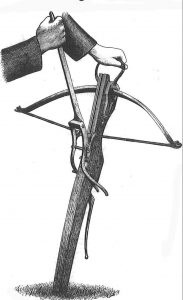 Heavy Crossbows are cocked (on Titan) using a crank or windless device that is built into the crossbow. Typically, a short length of rope with a hook is pulled from the wheel. The hook is put over the string and the crank turned to pull the string back until it latches. Some versions use a bar crank.  It is a slow process, yielding one shot every other round, but the shot is VERY powerful!

Prods are light crossbows that are designed to shoot small stones or lead bullets for hunting small game. A regular bolt would tear up the flesh and pelts of small game animals. The stone or bullet does little external damage, sometimes only stunning the creature, allowing the hunter to finish it off with minimal destruction and blood letting. They are not very effective against larger creatures or against armor of any kind.

At Short Range armor type is treated as being THREE LEVELS WORSE in determining the To Hit Score needed when shooting any crossbow.

At Medium Range armor type is treated as being TWO LEVELS WORSE in determining the To Hit Score needed when shooting a Medium or Heavy crossbow.

At Long Range armor type is treated as being ONE LEVEL WORSE in determining the To Hit Score needed when shooting a HEAVY CROSSBOW ONLY.

* Does NOT apply to Prods, prod stones or bullets.

Example: Banded armor is normally AC 4, vs a crossbow (NOT a prod) at short range, it is AC 7. (Magic bonuses, Shields and Dexterity, if any, are still applied.)

One advantage crossbows have, especially in a defensive situation, is the ability to prepare them ahead of time. If a character is able to cock and load several crossbows he/she can get several shots off very quickly. As long as the character has loaded weapons close at hand, (within arms reach) he can triple the normal rate of fire. When he runs out of loaded weapons, he’ll have to resume firing at the normal rate.

Crossbow Bolts ALWAYS shatter when they hit something. (Creature, person, tree, wall, etc.) Unless the bolt continues unimpeded in a flat, open area, until it drops to the ground, a bolt CANNOT be recovered.

Crossbow bolts ARE NOT INTERCHANGEABLE!

A bolt of the wrong weight will either shatter upon being shot (if too light for the crossbow) or plunge into the ground (if too heavy.)

ALL crossbows and Prods may be carried ‘loaded’ and ‘ready.’