DO NOT FORGET the racial bonuses per the PHB! (Listed below.)

I DO allow Age Modifiers per page 102 of the DMG.

Starting Hit Points are determined by Class.  Use the MAXIMUM number for that class Hit Dice. Example” Clerics are 1d8 hit dice.  Start the character with 8 points PLUS any Constitution bonus that may apply.
Future level increases will see Hit Points awarded per the Dice Roll.

If your character’s stats meet the qualifiers for the 10% Experience Point Bonus for your class, that bonus DOES apply.

Races:
The following Races are available for Player Characters.  ONLY these races!

Humans:  The most common race. There are several cultural and ethnic types available, see the section on Creating a Human for details.

Elves: These are VERY RARE! No more then one per party without consulting the DM!  The most common variety of Elf is the Wood Elf.  All PC Elves are Wood Elves.
Modifiers: DX +1  CN -1

Half Elves: As with Elves.  These are even rarer! No more then one per party without consulting the DM! All PC Half Elves are the progeny of a Human and a Wood Elf.

Dwarves:  The second most ‘common’ race after humans, though still a minority in the surface world.
Modifiers: CN +1  CH -1

Halflings: Very common in some places, especially Southern Solista, but virtually unknown in others.  The PC should decide if the character is a Stout, a Tallfellow or Mixed.
Modifiers:  DX +1  ST -1 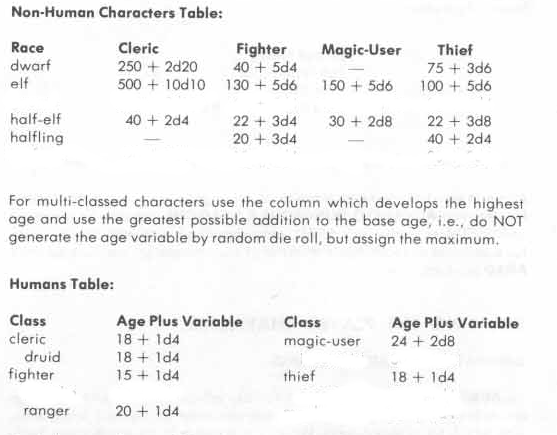 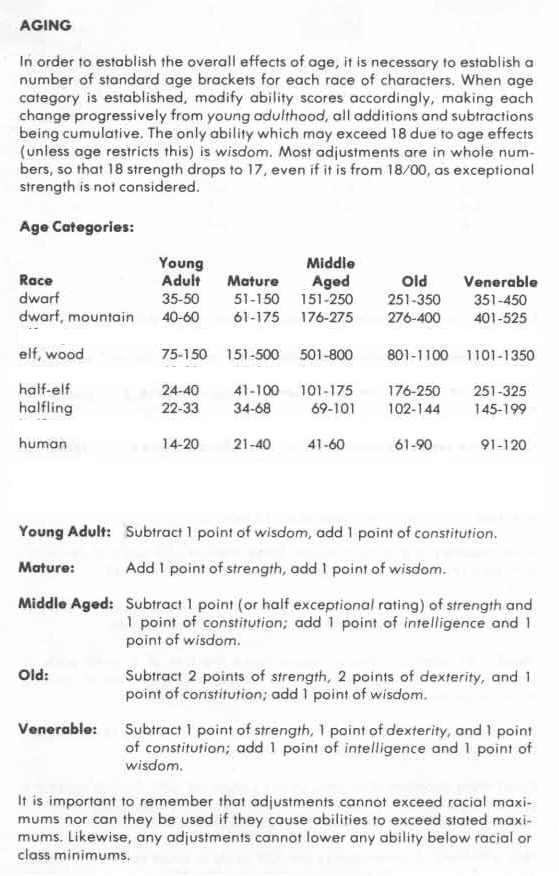 Use the following table (from the DMG) to determine your characer’s height and weight. 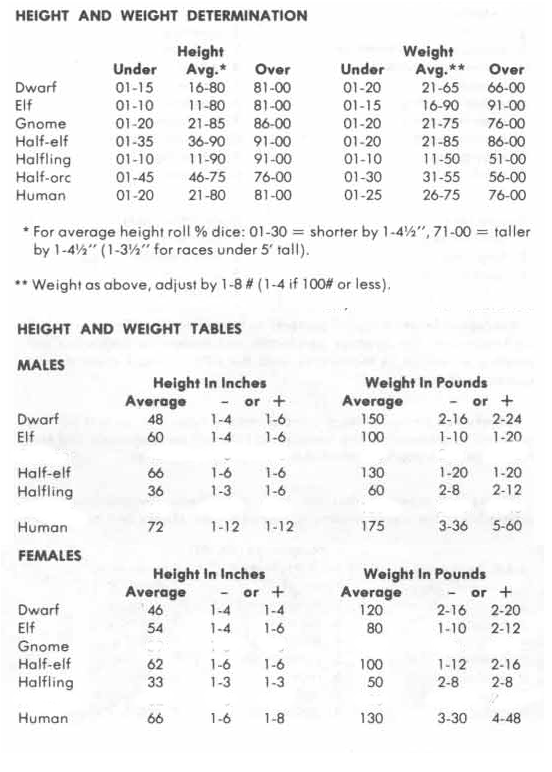 The following classes are available

HEALER
(DM NOTE: The purpose of this sub class is to take some of the weight off of Clerics as the primary source of healing, especially at low levels, and make small parties without Clerics viable from a healing view point.)

Healer is NOT a stand alone class but is intended to be paired with any other class.  It has no hit points, attack roll or saving throws.  It is simply a mechanism to learn how to create certain non magical healing substances.  Experience points are used to advance in the sub class, but since the craft of healing does not benefit from fighting monsters, looting tombs and engaging in combat (the stuff that brings in most EXP for players) only a small percentage of earned points may be applied to Healer.  See the description for more details.

Multi Class Character roll for new hit points ONLY when they have accumulated sufficient experience points to advance in BOTH levels.  So a 1st/1st Fighter/Cleric that has earned 3,200 experience points divides that total by 2 = 1600 in each class.  To advance to 2nd level cleric requires 1501 exp.  To advance to 2nd fighter needs 2001 exp.  Though the character is now a 2nd level cleric, and has the spell ability etc of that level, no hit points are rolled UNTIL there are 2001 exp in BOTH classes.  At that point a D8 is rolled AND a D10 is rolled.  The result is divided by 2 (Rounded up) and  Constitution bonus, if any, is added.

A Dual Class Character is a character who has elected (or been forced) to stop advancing in their original class and has taken up a new class.  He or she may not gain experience points for any actions employing skills or abilities of the Old Class until such time as the New Class equals the old in level.  There after experience points are gained normally.  Additionally, no hit points are rolled for advancement in the New Class until the new class exceeds the old.  Constitution bonuses, if any, DO apply.  The Dual Class character is limited in armor and weapon selections to the MOST RESTRICTIVE of the two classes.

The following Class Combinations are PROHIBITED both as Multi Class and as Dual Class.

Cleric/Druid: These are opposing religions.  The character cannot follow both!\\

Every Character, regardless of class, will start with the following (You do not need to include these costs in your calculations.)

Clothing
Tunic, Trousers, under garments
Boots, low (Your choice hard or soft soles.  You want High Boots, pay the difference in price )  Shoes are optional for Halflings!
Out Door Clothing, Wool Hooded Cloak or a Wool Cloak and Hat (Titan has a lot of cold days)

Psionics DO NOT EXIST!