Scholars debate the origin of Halflings, Some advocating the idea that they are some byproduct of inter species breeding, Human/Dwarf or Elven/Dwarf, or even an early Human sub species, while others feel they are a unique race of their own that was simply overlooked by the Ancient Elves and Dwarves until comparatively recent times (the last 10,000 or so years.) Whatever their origin they are not particularly numerous and hold no territory or kingdoms of their own, instead making their homes along side Human, Dwarven or Elven populations.
Although much shorter and smaller then a human, heights range from 2.5′ to 3.5′ and weight from 45 to 90 pounds, their overall appearance and coloration is very human like. So much so that they can often pass for human children. 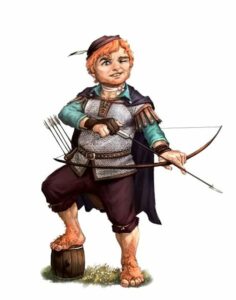 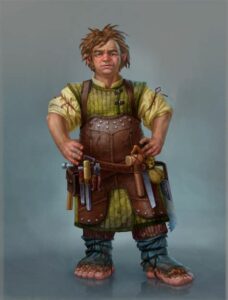