Another ancient race, but one whose origin is largely shrouded in myth and legend, even to Dwarven Sages. Exactly when Dwarves first appeared on the surface of Titan was, according to Elven Sages, about 40,000 years ago. But even the Elves admit that the Dwarves were undoubtedly around for a far longer period.
Dwarves range in size from 3.5′ to 4.5′ and weigh in from 130 to 210 pounds Hairier then a human, with extensive facial hair on males, their coloration ranges from pale tan through nut brown to dark gray. Hair colors is usually brown or black with some shades of red and very rarely, blond. 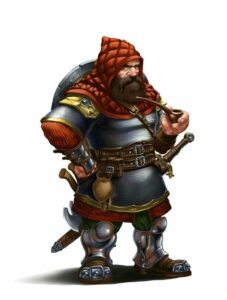 The Dwarves are a subterranean race, building enormous cities, some plunging a mile or more underground and spreading out over vast distances beneath the surface. No one knows how many Dwarves their actually are. How many cities exist or even where they are. Dwarves, even those that venture out amongst the surface dwellers, are notoriously close mouthed about their homes and evidence indicates that the younger ones (those most likely to be out and about) really have no idea of the full extent of Dwarvendom on Titan.
The Dwarves are rightly renowned for their engineering skills and metal crafting ability (though the craft skills of the Gray Elves is arguably the equal, possibly even superior, in some aspects of metallurgy.)