Ogres are not only evidence of the genetic connection between Goblins and Giants, but are also testimony to the fact that at one time such inter actions and relations were common enough to establish a self sustaining breeding population.
Averaging 9′ to 11′ in height and weighing in between 700 to 1,100 pounds with sparse hair and skin colors that are commonly gray but sometimes range to orange and red hues with spotted skin patterns being common. Ogres can be found in tropical through temperate areas and underground. They dislike the cold and rarely venture very far north or south except when compelled to do so.

Where as Giants have a somewhat undeserved reputation for intellectual deficiency, Ogres are deservedly considered slow and limited. They can be cunning and sly in combat, but can also be easily duped or misled. Many Ogres find employment in the ranks of the smaller, and smarter Goblin races. Serving as soldiers, guards and laborers. 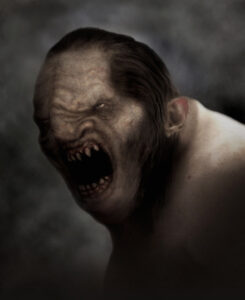 There is no Ogre language or culture.  Most Ogres speak Goblin or Haeb-Goblin and/or the most common human dialect of the area they come from.