Though it is generally accepted that there are different ‘families’ of Giants on Titan. Most Sages do not consider them separate races since they appear to be able to inter breed.

Despite the obvious difference between the races of Giants, (heights ranging from about 12′ to 24′ and weights of 2,500 to 15,000 pounds,) and the races of Goblins, they are in fact a variant of the Goblin species. Sages have argued for the racial connection between the goblins and the Giants, citing Ogres as an example of Giant/Goblin crossbreeding.

Giants have their own dialect that is a cross of the Human Common found among the  Barbarians of Gallena and a corrupted Goblin.  Some are more versed in the human tongue, though very few are fully proficient in Goblin.

All Giants are known to have exceptionally thick skin which makes them formidable opponents even without armor or protection. Their skin makes them virtually immune to damage from arrows and bolts from light and medium crossbows. (Arrows, light and medium bolts do 1pt of damage.)

Additionally, all Giants are renowned for throwing rocks! They start very young and practice it daily and are able to throw large rocks long distances and with great accuracy (+3 to hit) out to 30” and doing 3d8 (3-24) points damage.

All Giants are highly resistant to poisons and Magic, +6 on all saves

The Giants of Titan are classed (by Sages) as follows:

The smallest of the Giant families, and the one considered as having the closest connection to the Goblin races and is the presumed source of Ogre stock.

The Forest Giant ranges in size from 10 to 13 feet in height. Moderately hairy, much like a Hob-Goblin, their skin color comes in a wide variety from near albino white to very dark brown. Like Common Goblins, splotchy, piebald coloration is not unknown. 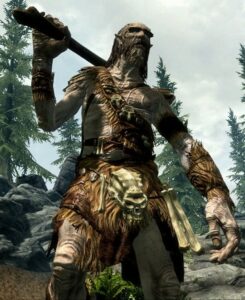 Forest Giants live an average of 150 to 200 years. Numerically they are the most common of the Giant races and are the most fecund with females frequently giving birth to twins and even triplets. It has been noted by sages that some female Forest Giants give birth to bizarre and violent, two headed offspring. It is speculated that this is the result of one twin killing and devouring the other while still in the mother’s womb. Such two headed Forest Giants are commonly called ‘Ettins’ and adult Ettins are considered particularly dangerous. 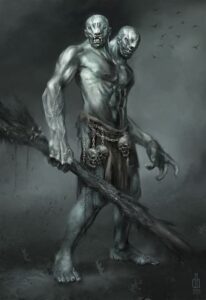 Technologically, Forest Giants are the most primitive of the Giant families, though they do recognize the value of manufactured goods they are mostly unable to replicate them on their own. Instead trading, or stealing, what they need in the way of weapons, armor or tools. Clothing is made of rough hides, weapons are often large clubs, studded with rocks or broken blades and ‘staves’ or spears tipped with old sword blades.

Forest Giants are strictly ‘hunter gatherers’ and like all Giants, omnivorous. Commonly nomadic, if they do have a ‘residence’ it is usually a cave or repurposed ruin and will often return to them seasonally.
The Forest Giant can be found throughout Solista, most commonly in wooded or forested areas. They avoid the open tundra and the most extreme cold regions.

Forest Giants, especially males, are often solitary, gathering several times a year with other Giants to trade and mate. There is often a lot of fighting between the unattached males. Females, juvenile males and young are usually found in small bands (along with a few attached males) numbering anywhere from 4 to 12. Bands are lead by the strongest Giant, be it male or female. Giant gatherings are held at the same locations, usually marked by great rings of stones, called ‘Dances.’

Forest Giants usually get on well enough with Ogres and, rarely, Bug Bears. Beyond that they are indifferent to the other sentient species with the exception of Dwarves whom they reputedly love the taste of! Some Forest Giant bands keep bears as pets and guards. Commonly assumed to be stupid and slow, this is not universally true and their intellect should not be underestimated. Forest Giants can be violent, greedy, rapacious and unpredictable. They are not, generally, good neighbors.

Larger and stronger, and seemingly smarter, then their Forest cousins, averaging 14 to 18 feet in height. The Frost Giants favor the cold of the great glacier fields and the far, frozen north of Solista. Their skin color is pale gray with long shaggy hair and beards (males) that is commonly brown or red with a few having straw colored hair. Frost Giants have a lifespan of 200 to 300 years. 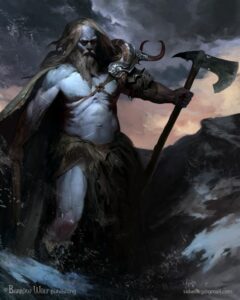 Unlike the Forest Giants, the Frost Giants are reasonably skilled at manufacturing the things they need. Working in metals, leather, wood and ivory. Clothing is mostly leather, but tanned and finished, and they make armor of bronze scales and or rings. Reserving steel for weapons.  Large axes and spears are favorite weapons.
They domesticate a number of the northern herd animals, musk ox, reindeer and even the great mammoths. It is not uncommon for them to have Dire wolves as pets, hunting companions and guards.

Frost Giants do build ‘houses,’ working with wood, stone and carved blocks of ice. Though it is not uncommon for them to occupy ice caves and caverns. Being seemingly impervious to the coldest temperatures, the homes they occupy are unheated with fire being employed mostly in working metals and, sometimes, cooking. Frost Giants may have several ‘Houses’ that the move between as the herds migrate. These structures are never completely empty, a few Giants and servants keeping them secure at all times, but the bulk of the Frost Giant Clan, numbering anywhere from 10 to 30, will travel with the herds to their other residences.

Frost Giant clans are ruled by hereditary Chiefs and on those rare ocaissions when clens merge the senior Chief assumes the title of ‘Lord.’

Frost Giant clans generally keep large distances between each other, ensuring that there is little friction between groups. Every few years the clans will gather for a ‘Moot’ of the Clans. This is primarily a social and trade event. Giants, who are not monogamous, will socialize, male and switch clans as circumstances allow. 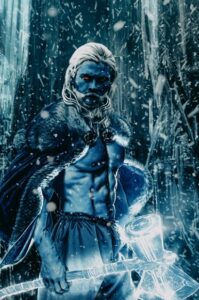 By far the rarest of the Giants in numbers, they are found mostly in the coastal mountains of Gallenna.

The smartest and most skilled fabricators of the Giants. They are known to weave cloth, work in precious metals and do magic!  In addition to their innate giant toughness, Mountain Giants typically wear well fitted and crafted armor such as banded with mail.  They use a variety of weapons, including magical ones.
They universally speak multiple languages and are generally literate.

Mountain Giant strongholds are usually hidden or located in remote places, constructed of massive stonework and protected with magic and guardians. It is said that Mountain Giants are able to change their shape and size, even their species. They are rumored to be allied with Gray Elves and like the Elves, have exceptionally long lifespans, 500 to 800 years being typical.
Though Mountain Giants are known to interact with their Frost Giant kin for trade, they have little to do with the Forest Giants.

Mountain Giants tend to live in extended families, ruled by the oldest and wisest of the family. Sages are uncertain as to how many Mountain Giants there are, with estimates ranging from a few score to a couple hundred.

Though Mountain Giants value their privacy, and will deal harshly with intruders, they are not overly violent or inherently evil, having been known to render aid to communities and peoples afflicted by various catastrophes.